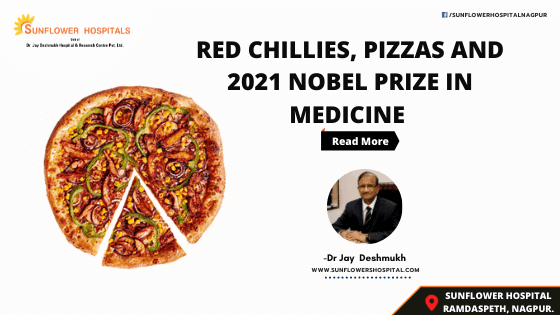 You can feel the heat of the sun and fire, the coldness of ice cream, the individual blades of grass under your feet. These are felt by certain receptors in the nerve endings. David Julius and Ardem Patagonian have won the Nobel Prize in Medicine and Physiology for this year. They won it for their discoveries on receptors for temperature and touch, a part of molecular biology.

What were the discoveries made by the US scientists David Julius and Ardem Patapoutian that led to their winning the Nobel Prize in Medicine and Physiology?

All human beings have the ability to sense heat, cold, and touch. These sensations are necessary for our survival. There are certain receptors present at the nerve endings that perceive these sensations of heat, cold and touch. The discovery of these receptors has been the biggest epoch-making advancement in the field of neurology and medical sciences.

Who is David Julius?

Dr Julius is a Professor at the School of Medicine at the University of California. His work on how sensory systems enable us to perceive our world. His research revealed the power of natural products to elucidate molecular mechanisms of touch and pain sensations.

What has he identified at the molecular level?

Julius and his scientists have identified ion channels on sensory nerve fibres that are activated by heat, cold and chemical irritants. This has given us a molecular insight into the process of thermosensation, pain and itch.

Who is Dr Ardem Patapoutian?

He is a Professor in the Department of Neuroscience at the Howard Hughes Medical Institute. His research focussed on the sense of touch which is unique. Touch by physical modalities like temperature and pressure and chemical modalities that cause pain, itching etc. He is a migrant to the USA from Beirut, Lebanon.

What was the role of chilli pepper in the discovery of these receptors?

David Julius utilized capsaicin, a pungent compound from chilli peppers that induce a burning sensation. This helped him too. Identify a sensor in the nerve endings of the skin that responds to heat. Aredem Patapoutian used pressure-sensitive cells to discover a novel class of sensors that respond to mechanical stimuli in the skin and internal organs.

Why is this research important?

The identification of pain receptors prompted a lot of enthusiasm from pharmaceutical companies. They expect that by blocking the pain response at the receptor level, you could address chronic pain by a variety of new medications against pain. These could be more specific, non-addictive and safe. However: some sensitivity to pain is useful. How could you prevent yourself from burns from stove or very hot water, if the receptors are blocked?

What about repeated exposure to capsaicin?

This makes the nerve sensory neurons less sensitive. As per Dr Caterina from King’s College London, this is why certain people tolerate spicy food due to repeated exposure to chillies. If you apply a patch on the skin having a lot of chillies or capsaicin, you may get relief from pain, as this may blunt the pain response.

How can Dr Patapoutian’s journey to win the Nobel Prize in Medicine inspire the young?

Hard work and determination and focussed work bring you nearer to success. Dr Patapoutian grew up in Lebanon and fled to California, US with his brother at the age of 18 years. To pay for his education, he went from door to door delivering pizzas and writing weekly horoscopes for an Armenian newspaper.

How did the research get the impetus it needed?

Dr Julius used a key ingredient in hot chilli powder to identify a protein in nerve cells that respond to hot temperatures. Dr Patapoutian a molecular biologist led a team that, by poking individual cells with a micropipette, hit upon a receptor that responds to pressure, touch and positioning of body parts. Next time when you have ice cream or hot and spicy food or pain due to a pinprick, remember the sensations are due to a single molecule discovered by Nobel laureates of 2021. Their discovery is likely to usher in new medications for pain relief that could be safe and more effective than the current therapies.